The best teacher is often experience. Learning leadership in the classroom is often too theoretical. Boys State is a practical opportunity to learn leadership skills through role play civic exercise.

Finally, Boys State is simply fun. Delegates will form lasting friendships. The connections made with other Boys State graduates will last a lifetime and provide social and professional benefits for years to come.

After the application has been processed, delegates will receive links via email to several online packet files. These files explain what to bring to the session, elected and appointed offices and a schedule of day-to-day activities. Carefully studying this information will help delegates benefit fully from their Boys State experience.

Our goal at Boys State is to challenge students to consider, perhaps for the first time, their political belief system. Our experience indicates that most people have developed their political thinking by borrowing ideas from respected friends, teachers, and parents. We are not interested in whether a student’s personal political interests are conservative, liberal or somewhere in between. Our concern is that their opinions are theirs, based on their own convictions about the role of government.

The big question is — where do people ‘learn’ such convictions? We would not assume for one minute that a week-long experience with us will shape political thinking for a lifetime, but we know that many of the 50,000+ young men from Kansas who have attended Boys State can trace the beginning of their political interests to this experience. Even if they are not interested in ever running for political office as a career, per se, they will be interested in the laws which are passed which will affect their life and the lives of people around them. 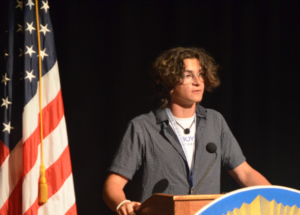 It all boils down to leadership. Leadership is a hard thing to teach because good leadership is usually only learned over a lifetime of challenges and opportunities. A week at Boys State condenses what might take several months in real life to less than 168 hours. We think that such a compressed simulation helps people learn lessons about the actions and consequences of leadership in a very realistic way.

The process of making laws, understanding taxes, cooperating with political action organizations are all part of the week you will experience called Boys State.

Today, just as as Hayes Kennedy and Harrold Card saw over 78 years ago, the youth of America can be easily discouraged by people peddling the truth wrapped up in easy answers which require little work grappling with complex issues and which see compromise as a sign of weakness rather than strength. To that end, Boys State still fills an important role in the education of emerging political minds.

Beyond party affiliation, delegates will be assigned to a City and a County. Those assignments have no connection with where they actually live in Kansas. We do our best to make certain that they do not live on the same floor with people from your high school or city so that they have the chance to work without anyone having any prior opinions about them. Within their City and County they will have a job. 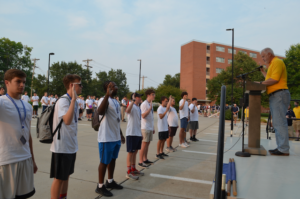 That job is part of the major computer simulation they will play during the week.

From a student’s perspective it works together this way.

“Let’s say you live in King County and you work for the city as a police officer. The city council will have to make a budget given its resources, and your position, or the position of someone you know may be cut if taxes are not increased. Of course, in this case you would support a tax increase. The owners of business within your city and county, however, are not as happy about the tax increase because it will mean that they will make less money and subsequently may have to lay off people to stay in business. This means that another person or group of people may be out of a job. However, the business has a great deal of pull with the Governor because they contributed heavily to his campaign. What will happen? Is there a way you could solve this problem so that everyone keeps their job?”

“The bottom line is that you won’t find this story problem on an ACT or SAT test. However, it is real, and it is one small example of the kinds of issues you will face at Boys State. Each day your City and County will be given projects which will call for a great deal of action at all levels of government. There are no right or wrong answers, but each answer, or series of answers, has consequences. The computer program we have designed to simulate the economy will consider each city and county ordinance as well as all state laws and then adjust accordingly. So, some action in one part of the state (i.e., blocking the major water source for the state which flows from west to east) could have disastrous effects on some other part of the state. The cities or counties involved may call for hearings and ask for the legislature to intervene.”

Our society needs great men and women to take a stand for causes and issues which will help our society to achieve the goals of life, liberty and the pursuit of happiness for all of its citizens. As a citizen everyone must have a good understanding of how government works to make this a reality. High school government classes are helpful, like driver’s ed classes are helpful, but without some practical experience it is hard to understand all the consequences of your actions. 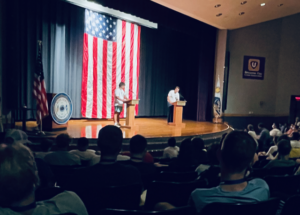 On one hand, your students may consider themselves good leaders in your high school. This program will help you test those skills among a completely new crowd of people they don’t know and who won’t know them. On the other hand, if your students haven’t really exercised your leadership skills very much, this is a great place for them to try out their ability at leadership. For many, many people this week has been a wake-up-call, a reality check of who they are and what they really stand for.

This process is accomplished through an outstanding group of counselors and advisors ranging in age from one year older than delegates through people who may be their grandparent’s age. They will find different opinions and ways of solving problems across the spectrum. The benefit to is that they can pick and choose what they see as the best ideas that they would like to incorporate into whatever is uniquely them.

It is well worth a week of their time to test the waters of democracy and see if they have what it takes to be a leader.